Seven months of dedication went into the creation of ‘The Detective’s Lover’. That time was spent heavily in post-production, with about a month spent filming on location throughout Phoenix. The final product is a feature-length collaboration from Running Wild Films, GuerrillaStar Productions and 5J Media. Focused as a Film Noir, and using mostly a run and gun style of filming, “The Detective’s Lover” received strong reviews. From recording our own sound effects (SFX), to working heavily with ADR, and using intricate editing techniques and sound design, I poured tremendous effort into the audio of this film.

The filming process was a typical Running Wild Films production: long hours, late nights, minimal food, just the way I like to work. When it came to the production audio, my primary focus was, as usual, to get the best audio on set as possible. The director, Travis Mills, picked a lot of locations that weren’t exactly “audio friendly,” which made that goal more difficult at some times. Although the locations were necessary to the story and our budget, there were several scenes that I knew would require more time in post to clean up. Luckily since I was also mixing this feature, I knew exactly what I needed as far as tone, Foley, and SFX and could record some of them on set during filming. 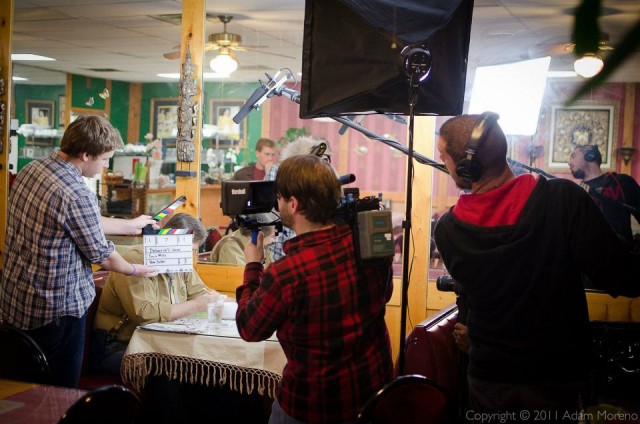 One of the early scenes was shot in an office building. For the most part it was a quiet setting, so it was easy to record quality audio. Lots of shots were close-ups, which always makes life easy, since I can use the typical boom and lavalier combo. Straight on recording like that makes picking up all the spoken lines, as well as foley, a cinch. The challenge for me in this scene was the wide shot, where Eddie walks up to pour a drink, and the photographer asks Scott about the Ostrich Festival. I faced a limitation of gear here and had to get creative. I run a Sound Devices 302 mixer into a Sound Devices 702 recorder. The set up gives me 3 ins and 2 outs, and only 2 isolated tracks, but we were using 3 mics and I wanted all 3 to be isolated. Thankfully, our Director of Photography, Dave Surber, had a Zoon H4n in his arsenal. I decided to use one lav on the main character Scott, and isolated it to the left channel. The other lav is on the desk where Eddie sits down, and it picks up his lines and Foley, which I already knew was going to have to ADR in the studio afterward, but the lav here gave me a good reference and I isolated it to the right channel. My shotgun mic was then hooked into the Zoon to get the photographer’s line. It might seem pretty straightforward, but it was difficult to monitor the level on both recorders while holding the boom. Luckily everything came out pretty clean. The only casualty of the scene was when the DP ended up standing on the Zoon’s XLR cable, causing it to fall and land directly on the top of the XY mics.

The rest of filming was pretty basic as far as recording audio goes. Travis used a lot of close up shots, which came in handy for me once I got into post because those shots always had the best audio.

In addition to working on films I have a day gig as a web designer, there were times I was not available for filming, so out of necessity some scenes were recorded with no audio. For example, the beginning of the car scene below had absolutely no audio recorded when it was filmed. Initially we had planned to lay music over it – an easy edit. Somewhere along the line though, we decided to add the SFX ourselves. Since the dialogue was shot while the car was actually moving, the back and forth camera shots made for horrible tone changes. (Of course, if we had the budget to put the car on a flat bed and roam around town, it would have been my first choice.) I did my best to EQ the tone to attenuate it as much as possible and bring out the dialogue, but the tone was still so different that it was distracting. In order to even it out, I had to record more car tone and lay it on top. Several reviews of the film point to the dialogue in the car scenes as being difficult to hear, and the necessity of that extra car tone is why.

Since I had the car tone recorded, and I also had a beginning shot with no audio at all, I was able to build on that tone. I added a lighter and a car window SFX, which were very easy to find in a sound library. The SFX of outside traffic with the window down was a little more difficult to find. Sure, I could have dragged the gear out and recorded my own. At this point I was about three months into post production though, and admittedly a tad bit burnt out. I came across a SFX clip of tone recorded inside a car with the windows down, though this clip was recorded while it was raining. I took the clip and did a bit of EQ’ing to give it more on the bottom end. It seemed to work, though if you listen close enough, you’ll hear rain in this sunny outdoor scene.

Since I wasn’t available for all the days this film was scheduled for, I needed to find a backup, specifically someone to go up north with the cast and crew to film in Winslow. Luckily, Tommy Schaeffer was available to cover me. He does a great job, but like me is sometimes limited when it comes to gear. He doesn’t have lavs, just a shotgun. In this scene, he was limited and decided to focus on the hotel manager’s dialogue. During post we had to add in ADR (Automatic Dialogue Replacement). I’ve been told the ADR is by far the best in this scene, which is nice to hear since my ADR studio is my bedroom. I use a Sennheiser 416 shotgun mic on a C-stand, plugged directly into my Sound Device 302 mixer, then straight into the Pro Tools sessions where I was mixing the film. The hardest part after recording the ADR was to EQ it to sound like it was outside. (Maybe I should have just done the ADR outside.) To correct, I cut some of the low and mid frequencies out and added a bit of reverb. I also had to add some outside ambience to cover the fact that I had cut up the production audio.

Just as I did while working on “The Big Something”, I learned a lot from this feature. I was glad to have the amount of time that I did for post audio work. Based on reviews so far there has been a lot of positive feedback about the film and the audio, though every time I watch it I catch something I would like to have done differently. Then again, I feel like my passion for what I do is most evident in my need to always learn and improve for the next time. Over time, I’ve learned that passion is the most important thing to bring to the set in this ever-changing and challenging industry.

“This film, however, is owned, operated and dominated by the superb sound design/production audio of Mr. James Alire…” -Bill Pierce, Examiner.com