Canon has just announced the addition of the EOS 5D Mark III DSLR camera to their product line. Plenty of enhancements will make cinematographers very excited, like the ability to take photos at 22 megapixels. It also records video in the MPEG-4 AVC/H.264 format, and allows you to record at 30, 25, or 24fps in 1080(Full HD) and 60 or 50fps in 720p. However, being the audio nerd I am, I was wondering if any of the audio specifications would measure up.

Every once in a while I am asked to run audio directly into the camera. This process cuts down on time later because the audio and video don’t have to be synced up in post production. Normally it is not easy to do with most DSLR cameras. They don’t have XLR inputs, and the only audio input they have is the mini jack. The fact that whatever you plug in does not secure makes for the chance of cables coming loose very high. The 5D Mark III still has this problem, but it’s no surprise due to the size of it. One of the other issues with running external audio into a DSLR is the fact that there is no headphone jack to monitor from the camera. Canon has finally fixed this issue, and the 5D Mark III is the first EOS series DSLR to have the standard 1/8″ headphone jack so you can monitor in real time and on playback.

One of the other great upgrades to the EOS 5D Mark III is the ability to manually adjust audio levels while recording. The manual control has 64 levels and gives greater creative options. This DSLR also gives the option to automatically level the audio, or sound recording can be turned off entirely. In the past when settings were changed during recording, there was no way to avoid the audible clicking of the wheel showing up in the recording. Canon has introduced a touch sensitive inner wheel on the circular control-wheel which allows the user to adjust audio level and other parameters such as exposure in real time without picking up the clicks.

The Mark III has made leaps and bounds for video, enough to make it worth the upgrade. In my opinion, more improvements will still need to be made for the audio guys out there. As a comparative tool though, any cinematographer will welcome the addition to their arsenal, and learn to work through the challenges. 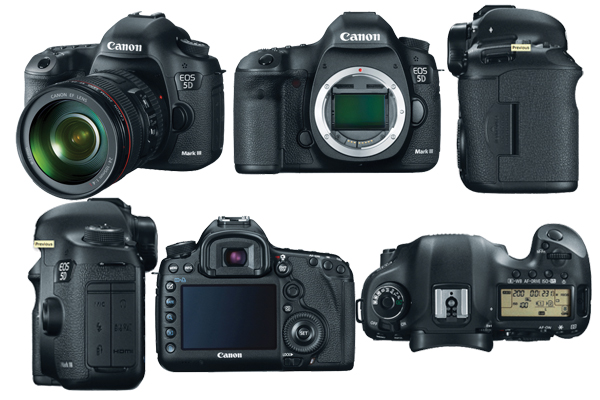