This past weekend we completed principal photography of the newest feature from Running Wild Films and 5J Media, “The Men Who Robbed the Bank.” The film is a crime thriller about bank robbers, focused not at all on the heist itself, but on what happens after the bank is robbed – the “Split”. The film is directed by Travis Mills who is also doubling as the Director of Photography for this feature. It is starring Michael Hanelin, Rob Edwards, James Leatherman, Stacie Stocker, Jonathan Medina, and Frank Gonzalez.

This film and the overall production is very different than any of the other films I have worked with, since most of the story takes place in one location. At first, it seemed that audio would be a piece of cake, but it turned out to be a lot harder than expected.

The first issue I noticed came from working on the old wood floors the location provided. The floors were very loud when you walked on them, not only from the sound of shoes, but also from the creaking and crackling of the aged wood. I immediately decided that all crew had to be in socks only while we filmed, which made it possible to move while filming without creating too much noise. Secondly, if an actor was not on camera, then there was no moving allowed when filming. These steps definitely helped alleviate some of the floor noise issues, but I have a feeling I am still going to run into problems when it comes time to mix this bad boy of a film.

The location we were at did not have an air conditioning unit, but it did have a swamp cooler. Due to the fact that we were still hitting 100+ degrees last weekend in Phoenix, I made the decision to leave the swamp cooler on while we filmed. Though it was fairly quiet, I made sure to record plenty of tone from different parts of the house, just in case it’s more of an issue when I start to mix. On the last day of production though, the cooler’s fan started to make a screeching noise when it was on. We turned it off at that point to alleviate any further issues, but the initial noise may have created some audio issues on a few shots. Since they were close up shots they should be easy to cut up and not have to do ADR for those scenes later in post. 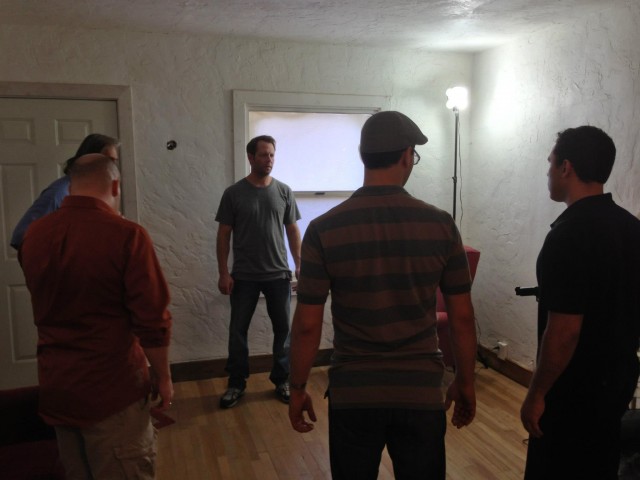 Overall, production ran pretty quickly, which means I had to work very quickly. I had a good technical set up that I was able to run with all weekend. For scenes in which the characters were stationary, I would mic each person with a Sennheiser ew 100 G3 ENG wireless sytem and a Sennheiser ME2 lav mic. If there was a scene with movement, we would have two cameras (2nd camera ran by Michael Coleman) on one person at a time and I would lav them and use the shotgun mic (Sennheiser MKH-416) on them to pickup most of their movement and give two audio sources to choose from when mixing. In some of the more aggressive arguing/fighting scenes, I just ran with a shotgun mic and followed the action, I will definitely need to add some foley and SFX to these scenes later. Working with lavs is sometimes a pain in the ass, but I came up with good ideas on this shoot to try in the future. 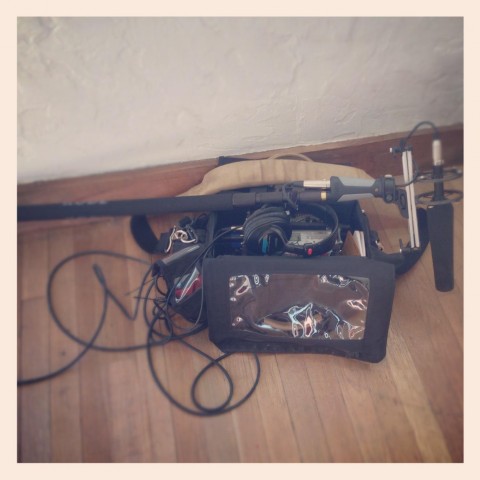 The rest of the film production will be done in flashback scenes over the next few months. We are still working out actors and locations for those, so I will update this blog on those steps as they are finalized.