When it comes to filming, both independently and commercially, you can’t always have an audio guy on hand.  Likewise, when using a DSLR Camera, getting the best audio can be a lot more challenging than one would think. Often, budgets and other restrictions mean that the only equipment available is a noisy on-camera microphone with no way to monitor what is being recorded. So how is a lone videographer/cinematographer supposed to get the best audio and still be able to focus on getting great video? Luckily, plenty of gear exists that is easy to use and creates great results.  All you need is a DSLR camera and the tips below to get great audio on-set. Not possible?  Read on.

Like with most technology, there are tons of options for every need, especially when it comes to external microphones.  In fact, I could easily write this entire blog just on microphones alone and which to use (don’t worry, I won’t). The biggest criteria for figuring out what microphone to use is to figure out the type of sound you are trying to capture.

Say for example you are shooting a concert or another event where it’s crucial to capture a stereo sound image. You would of course want to use a stereo mic. Something like the Rode Stereo VideoMic

or the Audio-Technica PRO24CM Stereo Microphone

which captures audio in an X-Y pattern and gives you a stereo image of what the lens sees. Since these mics are stereo, you wouldn’t want to use them to capture someone talking in front of the camera, or any kind of important dialogue. 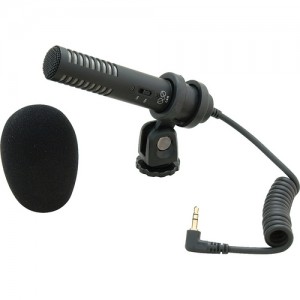 If you are working in an interview type of setting, or filming a scene with pure dialogue, then you would want to go the route of a unidirectional/shotgun mic, or even a wired or wireless lavalier mic. My personal favorite shotgun mics are the Sennheiser MKH416

and the Rode NTG3

, however, these are higher end microphones and the cost is higher than some budgets call for. If like me, you normally film on a tight budget and need something a little less pricey but still with a decent sound, I recommend you work with the Rode Video Mic. It is similar to the Rode Stereo VideoMic, but records the audio in a unidirectional (straight ahead) pattern rather than in an X-Y stereo image.

It is always good to have wireless lavs on hand for both interview filming and cinematic filming. I use them on almost every set. I typically use a Sennheiser EW 112P G3 system

. However, I would personally recommend getting some Countryman B6

lav mics if you can afford them. Not only are they super small and easy to hide, they sound great and they have a very low handling noise, so you don’t have to worry about constantly adjusting them because of clothes rustling or other variables you encounter. You can also get creative with lav mics and use them in ways other than just hiding them on someone’ body.  You can read some examples of how I did this on The Big Something set in one of my first blogs. 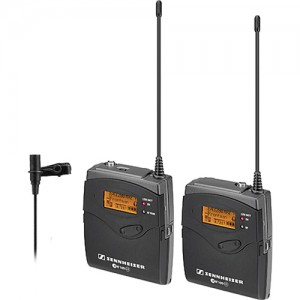 After you have a microphone picked out for your project, what the heck do you do with it? How do you record the audio? How do you get the audio into the camera? Will you need additional gear? Well, one easy answer to all those questions is to use an external audio recorder. Using an external recorder gives you a few new options. First, it gives you the ability to have XLR inputs for your microphone, as well as using phantom power (transmitting DC electric power through microphone cables) if needed. Second, and maybe most important, it allows you to monitor the audio being recorded in real time. Another advantage of using an external audio recorder is that you can use the line output of some of the recorders and record the audio both on the recorder and directly to the camera, giving you a backup in case something were to get messed up (because that NEVER happens). The only downfall to using an external recorder, such as a Zoom H4N

is that you will have to sync the audio and video later in post production. However, if you use the camera mic to record the audio as well, you can easily use third party software, such as PluralEyes or even Final Cut X to automatically sync the audio for you. Lucky for you, I talked about the best software for post production audio editing two blogs ago – check it out.

Zoom H4n mounted to the top of a DSLR camera

Another option to use with your external microphone and DSLR camera is an XLR box. This interface, which usually attaches to a camera’s ¼ 20” thread, gives you the XLR inputs so you can plug an external microphone into your camera. Many XLR boxes just give you an input and an output, still raising the issue of monitoring the audio being recorded. However, XLR boxes like the BeachTek DXA-SLR

give you a headphone jack so you can monitor as well.

Personally I like the Beachtek DXA-SLR box (another shameless plug!) The Beachtek box gives you a headphone jack for monitoring audio pre-camera. It also gives you an RCA audio jack, so you can use the DSLR’s AV-out to plug back into the box. Then, you can toggle back and forth between monitoring the XLR audio and the camera audio. Another important feature to note is the box has an Automatic Gain Control Disable feature. AGC is a feature on most DSLR cameras that automatically raises the input levels when recording sounds that are very low in volume. In the real world, these levels can swing wildly and in quiet settings the less than pristine mic preamps can create a lot of hiss. The Beachtek AGC disabling feature sends a 20Khz tone along with your audio to the camera. The tone then tricks the camera into disabling its AGC. The 20Khz tone is only on the left channel, and is out of the range of normal human hearing so you shouldn’t hear it and it shouldn’t affect and of the audio you record. 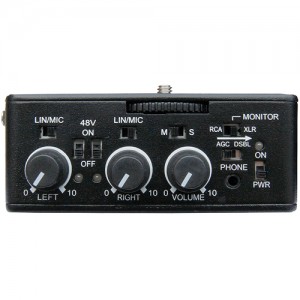 As you have noticed, there are many different ways to get great audio on set without the use of an audio guy (But, why would you ever want to record anything without an audio guy?). The best route for the cleanest audio is to use an external shotgun mic with an external audio recorder, but sometimes that’s a lot to do alone. The last thing you want to do is have to troubleshoot your gear when you are in front of a client, so no matter what route you use, don’t forget to test everything before you get out in the field.