How to Get Room Tone From Production Audio using Pro Tools

When on a production one of the most important things a Sound Recorder / Mixer can do is record about a minute of general room tone/atmosphere. Having this “spare” sound allows the Sound Editor to make cuts freely and have environmental sound to lay underneath the cuts so you don’t get the weird audio shift between cuts like in this extreme example I found on YouTube:

The audio is horrible throughout the film, but at the 8 second mark you can see how the audio shifts when the camera changes angles. Having room tone to edit in would have been helpful.

So, what do you do if you forget to record room tone on set? You could always go back to the location to record it, but it’s most likely that the sound won’t match on a different day. You could try to find a clean few seconds from the recorded dialogue and loop it, but chances are that looping a small 1-2 second clip will result in some kind of repetitive noise in the loop that will be noticeable and you’ll be back to square one.

What other options do you have? Well there is a trick in Pro Tools that will could give you a long enough sample of room tone that could be used or looped and help alleviate the issue.

The first thing you need to do is import the audio track you want to pull room tone from. For this example I used a dialogue track from a scene that was recorded in the basement of an antique shop. The track is a recording from the boom mic and consists of dialogue between two people. There is a noticeable air conditioning noise in the background that would cause cuts to be noticeable without room tone. 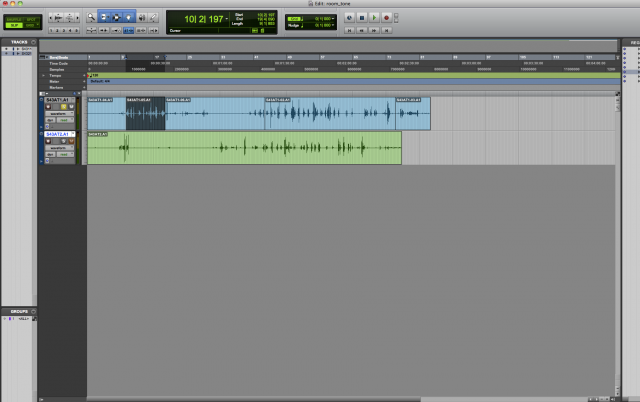 After you import your audio, cut it up and keep just the sections where the scene is taking place (between “action” and “cut”). If you kept the parts before or after the scene, the boom was probably moved and the room tone would have been different. By using only the sections of the recording where the scene is taking place you will get the room tone that most closely matches the scene. The scene I used had two takes for the boom track. 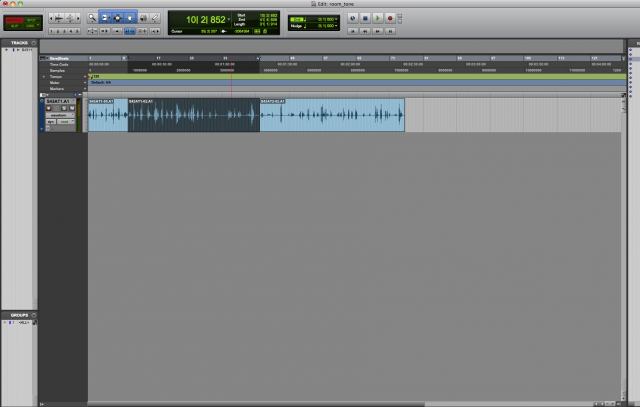 Once you have your new regions, move them to the same track. Select the entire region using Command-A(Mac) or Ctrl-A(Windows), then activate Strip Silence with Command+U (Mac) or Ctrl+U (Windows). For this example I used a Strip Threshold of about -34 db. The threshold you use will vary based on the recording and scene itself, so it’s a good idea to zoom in and see what the preview is selecting for you.

After you find your optimal setting, rather than hitting “Strip,” hit “Extract” to remove all the audio above -34dB and leave just the room tone.

There will be space in between the regions where you extracted the dialogue, so you need to pull everything together. The best way I have found is to first put Pro Tools into Shuffle Mode(F1). Using the Grabber tool, grab each region and snap it to the end of the region in front of it.

Once all the regions are snapped together, you can fine-tune your room tone. Audition it and see if any regions need to be deleted or trimmed for sounds that weren’t removed. Things like foot steps sometimes stick behind since they are so low in dBs. Since Pro Tools is still in Shuffle mode, anything you delete or trim will cause everything after it to shift also, so you won’t need to go back and move all the regions back together. Then just select all the regions on the track again and add cross fades to all regions using Ctrl+F (Windows) or Command+F (Mac). In the example I added 10 ms fades, but 10-20ms should work fine.

Depending on your original audio this process should give you a long enough segment of room tone. It can then be looped and added to your edited scene to make the audio flow between cuts and make them less noticeable.

Below is an example of the room tone I pulled out quickly from the 2:30 dialogue clip I had. You will notice there are subtle foot steps here and there that I can go through and clean up, but there is easily enough room tone that I could loop and would work well.

Like any editing methods, yours will develop with time and practice, but hopefully you can benefit from some of my trial and error. Of course, if you remember to record the room tone on-set, you can skip right past it all and move on to the good stuff!