A large volume of software exists for audio editing- in fact, maybe too much.  When it comes to selecting the right software though, how does an engineer choose?  Some programs are geared towards creating and writing music, some for editing and mixing in a studio environment, and some for recording or broadcasting in a live sound spectrum. However, in my case, which is the best for post production audio?

When it comes time to mix audio in post production there are a few things to consider in the software you choose:
·      How easy is it to sync the audio/video?
·      What plugins will I have access to?
·      What are the specifications for audio and the formats I can use?

I used these three questions to evaluate some of the more commonly used software on the market: Final Cut Pro, Pro Tools, and Apple Logic.

Final Cut Pro 7 is probably the most used video editing software on the market right now.  It supports audio files up to 96Khz/24bit with FCP7 and 192Khz/24bit with FCPX. When it comes to syncing, the ability to place digital markers in both the audio and video tracks makes the entire process seamless. Using snap-to points with these digital markers allows for a quick edit, without having to manually spot each effect onto the video timeline. Third-party plugins like PluralEyes can be installed, which makes syncing audio/video as easy as clicking a button. When using Equalizers or other effects however, you are unable to add them to entire channels at once, you can add default fades to all the audio regions at once, but it may not work with the default fade setting for each region. If you have a lot of cut-up dialogue to work with, it can become very time consuming. For example, while mixing audio on The Big Something (feature by Running Wild Films), we had no time for ADR, so I had to cut up a lot of audio to make it sound clean. I could have dumped it all into Pro Tools and then back into FCP, but it was just faster to do it in FCP. By the time editing on that feature was complete, my speed in FCP was just as fast as in Pro Tools. 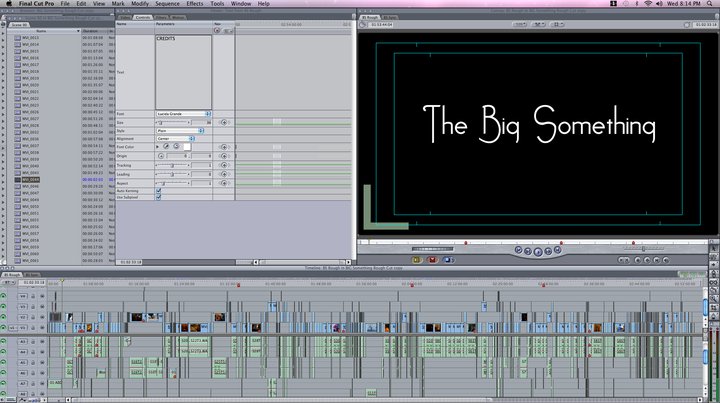 Final Cut Pro X also incorporates a similar PluralEyes feature to the new version. Other plugins include the OS X Audio unit plugins, which come pre-installed, and some third-party DSP plugins that you may choose to install.  Unfortunately, the plugins that would come preinstalled with Apple Logic are not available in FCP7, but they are in FCPX as well as all 64bit DSP plugins.

I should add the disclaimer that most of the negatives I have mentioned for Final Cut Pro 7 have been improved in Final Cut Pro X. Personally I have not used FCPX, but have researched its new audio abilities and tools. I look forward to trying out the upgrades soon.

Both versions of Final Cut Pro seem easy to use once you get used to them. However, it takes a while to get up to the speed of editing audio in it that you can achieve in Logic or Pro Tools if they are what you are used to. Using effects is sometimes difficult because you don’t get the graphical EQ options like you do in Logic and Pro Tools. Overall it’s a strong product, with attention being given to some of the more frustrating nuances in the newest version.

Pro Tools will always be my favorite go-to piece of software when it comes to editing and mixing audio, but how does it keep up when video is thrown into the mix? Unlike Final Cut, Pro Tools does not allow you to add digital markers to the video, but you can add them to the timeline.

For editors who can handle the extra work, Pro Tools has many benefits that outweigh this smaller issue.  For example, you can add EQ and effects to specific regions or entire tracks, and you can see the wave form in the region without having to open it up in a preview window. In other words, it is easy to edit in the timeline.  The editing tools are just overall easier to use, and Pro Tools supports QuickTime H264.  Also, for those wanting to score the tracks they are working on, Pro Tools allows scoring directly within the program.

For some of the more technical users, you’ll be happy to know that Pro Tools allows up to 48 tracks and will import just about any audio file known (REX, ACID, WAV, SDII, AIFF, AAC, and MP3). Though it does require the use of M-Audio Interfaces, they work seamlessly.  Of all the editing software out there, you’ll get the highest resolution with Pro Tools HD, at 192Khz and up to 32 bit floating point format. As a result, you get a much larger dynamic range for audio files which will help with clipping and noise when adding effects.

Pro Tools is by far my favorite program to edit and mix music. However, it’s not the easiest software for working with video. The parent company of Pro Tools – DigiDesign – was recently bought out by Avid, whose strong video editing software competes with Final Cut.  It looks like the newer versions of Pro Tools will more easily incorporate with Avid Media Composer, so stay tuned for good things developing.

If you need a good quality piece of software for music creation, the first that comes to mind is Apple’s Logic Pro. Originally designed for taking music projects from the first note to the final .wav file, it also has a film editing feature. You can still snap-to the grid like with Final Cut, but because the video support is more of an overlay to the audio, locking the two up is more difficult and time consuming.  However, you can use Scene Detect to mark video transitions automatically.

Logic Pro makes it possible for you to take advantage of amazing plugins, tools, and thousands of royalty-free sound effects, loops, and music.  However, it limits your project to 3 hours (at 192 Khz/24bit) or 6 hours (at 96 Khz/24bit). You can use a full screen display on an additional monitor as well. External video output and Quicktime video playback are supported in Logic Pro, making it simple to share your finished – or not so finished – project.

Overall, Logic is incredibly easy to work with video. Be aware that you must have the video edit finalized before working with it, since you can’t edit the video in any way once it’s imported. It automatically detects scene changes, which helps to sync things up, and the snap-to feature isn’t as nice as Pro Tools, but it is workable. The tools and plugins are great to use and the editing tools make the entire process go quickly. It’s a solid piece of software to use for simple short films, but I wouldn’t want to edit an entire feature in it.

As you can see, all of the software out there has its strengths and weaknesses. In a way it comes down to your individual needs when it comes to film audio.  Personally, I will always prefer Final Cut simply because it is the strongest overall for a multitude of projects.  The challenges are worth the versatility, and many of those challenges seem to be addressed in Final Cut Pro X.  Ultimately, it’s a choice to be made based on the strengths of the user and the individual needs of their project.  Someone who is capable with each program will be a more valuable editor in the long run, simply because they’ll be able to leverage each program’s strengths where needed.  Choose wisely, and enjoy the process!