On May 4th, 2012 Marvel Studios and Walt Disney Pictures released one of this summer’s most anticipated blockbusters, The Avengers. There was a lot of talk about the film in my circle of friends, and it was so hyped that I was sure to feel left out if I didn’t see it. So, of course I went to see it on opening weekend. And yes, I had to see it in 3D.

Sound Design of The Avengers

Overall, the film was amazing. It could have easily been overdone, but wasn’t. In fact, it seemed to be created as more of an intense action flick than a comic book sci-fi film. It is directed by Joss Whedon, who created TV shows like Buffy: The Vampire Slayer, Angel, Firefly, and Dollhouse. The brilliant surround sound was mixed to make the audience feel they are in the environment without being distracting. The attention grabbing 3D effect mixed in with superb audio instantly immerses viewers and suspends reality, as any feature film should. The Avengers just does it better than most. 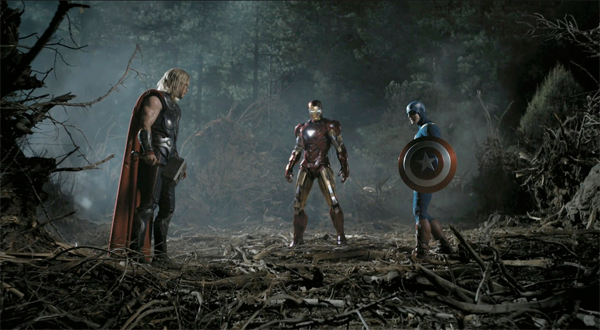 Now I could be just a little too analytical about this next part (it’s happened before) and would appreciate your comments. When the film Independence Day came out, I watched it a lot, and I mean a lot. Needless to say I became very familiar with the sound design of the film. While watching The Avengers, I couldn’t help but notice some of the SFX being very familiar, especially the sound of the guns firing from the alien ships in the main fight sequence. I decided to do some research to see if there was a connection.

I couldn’t find anyone in the sound department for The Avengers who had worked on Independence Day – that would have been too easy – so I had to dig deeper. In the SoundWorks Collection video profile of The Avengers, Sound Designer Christopher Boyes, who also worked on Ironman 1 & 2, stated that they wanted to keep the film original. To do so, they used the same SFX libraries from the character films Ironman, Thor and Captain America. The Hulk character SFX on the other hand was redesigned by Boyes and included a combination of human sounds from actor Mark Ruffalo, original Hulk actor Lou Ferrigno, and Boyes himself. Having learned there was a tie-in to the original films, I decided to take a look at those films and see if maybe there was a connection from them back to Independence Day. Sound Designers John P. Fasal and Jon Johnson from Independence Day were the obvious place to start. Interestingly enough, Fasal worked as a SFX Recorder on Thor and Johnson worked as a SFX Editor for Captain America. Now I am not saying that the same SFX were absolutely used, but knowing there is a connection lets the tiny OCD synapses in my brain rest a little easier.

Another interesting connection is that the film’s score was created by Alan Silvestri, who also worked on Captain America. The emotionally heroic themes built into the soundtrack continue to drive the action throughout, to the point where it’s tough to tell if the action is driving the sound, or vice versa. Sound is such a huge factor in the emotions built through any film, and I could even perceive changes to the theme based on which character was on screen. For me, that effect created an individual emotional attachment to each hero.

Although there was nothing groundbreaking done for The Avengers from an audio perspective, it was recorded, edited, and mixed exceptionally well – thanks to the heavy hitters on the sound staff. The Avengers serves as an example of what quality audio work is (and should be) all about. If you haven’t seen it, then I suggest you do. If you haven’t seen it in 3D, then you really haven’t seen it at all. This film is one that you absolutely have to experience as fully as possible. I’m sure it will have a long theatre run, but really, why wait?

Check out the SoundWorks Collection video profile for The Avengers below:

View the original video at the SoundWorks Collection website.