One of the films I anticipated most this summer was Christopher Nolan’s latest Batman feature “The Dark Knight Rises.” From the moment I heard the sound design of “The Dark Knight,” Nolan’s adaptation of the Batman series instantly became my favorite. The way he removed the fantasy realm of some of the previous Batman films and made his version more darkly realistic was truly mesmerizing, even for a comic book adaptation.

The sound design in “The Dark Knight Rises” was superior. That’s to be expected when you learn it is designed and supervised by Richard King, who worked with Nolan on “Inception.” Though King didn’t work on the previous Batman films with Nolan, he rounded out his sound department with people who had: Re-Recording Engineer Garry Rizzo worked on both films, and Sound Effects Editor Michael Babcock worked on “The Dark Knight.”

My research shows that the sound mix of “The Dark Knight Rises” took about 12 weeks. Nolan spent every hour of every day overseeing each aspect of the sound, going scene by scene, and frame by frame. For a director, that’s a lot of dedication, especially following 7 months of shooting. “When you’re dealing with sound mixing, and post-production, we try to address these subtleties for the audience” Nolan said. “It’s all really about building to this moment where you put it out there for everybody. And until that happens, it’s not done.” 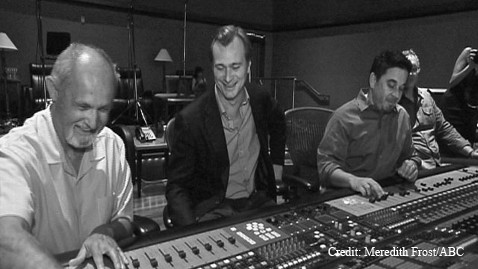 The film is mixed in the formats of SDDS, Dolby Digital, and Datasat, and was also shot on both 35mm film and 70mm IMAX film. I was lucky enough to view the film on one of the few IMAX screens in the Valley, but the theatre was only running a 5.1 setup. It still sounded great, although a little loud, but I would have loved to hear it in a 7.1 or 9.1 setup, sitting directly in the “sweet spot.”

The sound mix itself was also done extremely well. The sound effect (SFX) used for Batman’s vehicles was not only unique, but it was realistic and matched what we were seeing. The sound of The Bat when you first see it in action is like a combination of a military helicopter and a Harrier Jet. It gave me the same feeling as it probably would have given the cops in that actual scene. My favorite part about the SFX for this film is all the gunfire. The surround mix for the gunfire wasn’t overboard and the SFX used for the big guns was very powerful. The kick from the sub woofer in the theater was just as I would expect it to sound and feel if I was standing close to the actual weapon. 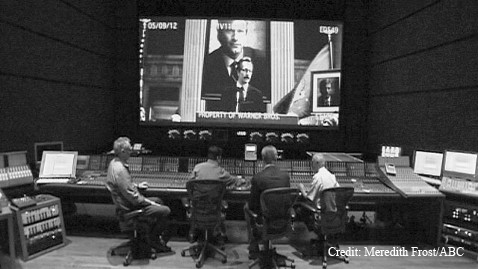 The only downside to the mix I could find is that some of the ADR (Automatic Dialogue Replacement) was flawed in the mix, because it was obvious to the trained ear. The point of good ADR is that you shouldn’t be able to notice it. Since not many casual watchers noticed it, I can’t truly mark it as a negative. On the other hand I did have some major issues with Bane’s voice.

When the first trailers for this film came out, a lot of people were talking about how hard it was to understand Bane. I have read, but can’t confirm, that the audio was altered for the final release. Personally I had no problem understanding the character, except for the couple scenes when Bane was talking on a loudspeaker.

The fact that Bane may be unintelligible to some people may not be a bad thing. His role is definitely more about what he is destroying rather than what he is saying. Nolan wanted the audience to pay more attention to the character and what he is doing as opposed to what he is saying. As one of his studio executives said in regards to Nolan’s opinion on Bane’s voice, “Chris wants the audience to catch up and participate rather than push everything at them. He doesn’t dumb things down, you’ve got to pedal faster to keep up.”

Maybe I’m just picky, or my sound background is coming out, but the garbled voice is not what bothered me. What bothered me is that the voice, which sounded like it had some kind of underwater modulation effect to it, was mixed inconsistently for various scenes. For example, the very first scene in the film takes place in a plane that is falling apart, so needless to say there is a ton of wind and engine noises. Bane is having a discussion with someone and you can hear the wind interfering with the frequencies of the other character, but when Bane speaks it actually sounds clearer and much louder. It took me out of the scene because to me, that’s not what I would expect it to sound like high in the sky in a plane that is falling apart. There are other parts in the film where I felt the mix of his voice was unrealistic, not matching the location or the other speaker. The overall mix for it could have been better, but in no way does it take away from the great story of “The Dark Knight Rises.”

Film Critic, Scott Weinberg, described Bane’s voice as “Stephen Hawking doing a Sean Connery impression.” However, Tom Hardy, the actor who played Bane, actually stated “It’s based on a guy named Bartley Gorman”. Bartley Gorman was an Irish Traveler who was the undefeated bare-knuckle boxing champion of United Kingdom and Ireland, often referred to as King of the Gypsies. Check out video of him below:

Music of “The Dark Knight Rises”

Like the previous two Batman movies, the music was composed by Hans Zimmer.
James Newton Howard, who also worked on the prior films, was asked to return and write music. Howard chose to pass, reportedly because he felt he would be a ‘third wheel’ since Zimmer and Nolan had gotten so close while making “Inception.”

Zimmer included a lot of cues from earlier films, but stated he wanted to go in a “completely different direction” for Bane’s music. The dynamic changes in the musical score signaled plot and mood changes from when you saw Batman/Bruce Wayne on screen to when you saw Bane. Throughout the film, the music was prompting you to feel strongly one way or the other and evoked visceral reactions to the changing emotions on screen.

For one of the songs called “Gotham’s Reckoning”, Zimmer wanted to record hundreds of thousands of people for the chant. That’s just not easy, even for someone of his caliber. In November of 2011 he took to Twitter and Social Media and asked people to be part of it. Zimmer stated, “It seemed like an interesting thing. We’ve created this world, over these last two movies, and somehow I think the audience and the fans have been part of this world. We do keep them in mind.”

The score itself is very dark and eerie, exactly what you would expect in the shadowy world Gotham City has become. Zimmer was able to push the envelope for this film saying, “success gives you courage and lets you be a bit more daring and a bit more emotional in the music.” He did his best to capture the aural atmosphere from the first two films as well. “We worked really hard at creating this sort of sonic world which is Gotham, you don’t want to go and suddenly break out of that. I very deliberately kept the sonic landscape.” Zimmer revealed that Nolan felt it essential that he attempt to mirror the film’s winding plot line via his score. “Chris is only interested in me understanding the narrative,” he says. “The thing which we’re most interested in is that I get to be this sort of parallel voice.”

Great end to a great trilogy

“The Dark Knight Rises” is of course a must-see, for audiophiles and the general public. The intense combination of the sound mix and the musical score create a captivating reality of emotional connections that most trilogies do not bring to the table.