Recently I had the opportunity to see the The Hobbit: An Unexpected Journey, directed by Peter Jackson. The newest fantasy feature from New Line Cinema and MGM, this film is a prequel to The Lord of the Rings Trilogy based on the books by J. R. R. Tolkien. As expected, the film’s new audio, sound design, and visual techniques drew my attention. 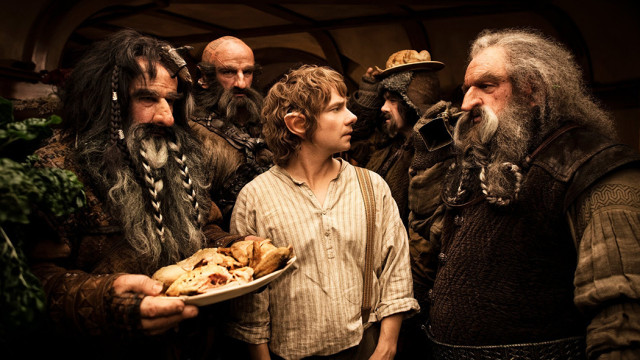 Audio and sound design was mixed at Jackson’s Park Road Post Production Studio in Wellington, NZ. The studio is run by Oscar winners Christopher Boyes (Re-recording Mixer), Michael Hedges (Re-recording Mixer), and Michael Semanick (Re-recording Mixer), all of which worked on The Lord of the Rings Trilogy. This film was not only shot in 3D but in an amazingly vivid 48fps (frames per second) over the normal 24fps. The audio was mixed in the new Dolby Atmos format, which debuted with Disney/Pixar’s animated film Brave. The newer technology allows the mixers to plot sound elements to individual speakers around and above the theater, rather than the simple 7.1 surround sound design.

Jackson first learned and heard about the new Dolby Atmos design last spring when Dolby came to his New Zealand studio for a demonstration. Jackson made a statement about the new technology:

“I strive to make movies that allow the audience to participate in the events onscreen, rather than just watch them unfold. Wonderful technology is now available to support this goal: high frame rates, 3D, and now the stunning Dolby Atmos system. Dolby has always been at the cutting edge of providing cinema audiences with the ultimate sound experience, and they have now surpassed themselves. Dolby Atmos provides the completely immersive sound experience that filmmakers like myself have long dreamed about.”

Jackson immediately fitted his studio for Dolby Atmos and plans to adapt a second sound stage and his viewing room with the Dolby Atmos system.

Upgrading the Sound Design and The Wilhelm Scream

Even though the team had a huge library of sound to use from the previous three The Lord of the Rings films, they decided to re-record everything on location in New Zealand where a lot of the filming was done. They encountered issues when trying to use their old 16-bit / 44.1kHz sound library. In order to produce a high definition sound to match the stunning 48fps visuals, they had to record in 24-bit / 48kHz. Their extra work means that the sounds you hear of the beautiful landscapes or dark caves are HD sounds recorded from those exact locations.

One of the new challenges faced on The Hobbit came from the introduction of new languages and dialects, specifically the goblins. These characters had to be unique from everything else and required a completely different sonic profile. Michael Hedges (Re-Recording Mixer) stated in regards to this character, “Clarity isn’t a major issue. The scare factor is what we’re trying to achieve.”

I found the appearance of the often-used Wilhelm Scream humorous. (Used in more than 200 films since the 1950’s, like Indiana Jones and Star Wars, it has become an insider joke among audio engineers.) When told the history of the Wilhelm during the sound mix of The Lord of the Rings: The Two Towers (2002), Jackson was so excited it was included that he had its volume raised – and insisted that it also be used in Return of the King. He then, of course, used it in The Hobbit: An Unexpected Journey (Video below, heard at the :35 second mark) and I expect it will be used somewhere in the trilogy’s next two films as well.

Musical Score of The Hobbit

The musical score to An Unexpected Journey was composed by Howard Shore, and is used for about 85% of the film. The soundtrack was recorded at Abbey Road Studios in London with the London Philharmonic Orchestra. “I wrote the score specifically for the LPO,” says Howard Shore, “This is very much an LPO sound that they’ve created for Middle-earth.” The goal for this trilogy’s soundtrack was to be a lot lighter than the Lord of the Rings score. An online review from the Geeks of Doom commented that Shore re-uses some of the “magisterial musical motifs” from the Lord of the Rings soundtrack, but that he “uses his established themes to launch into a completely original sonic adventure with turns both optimistic and dark, true to the mutual visions of Jackson and Tolkien.”

Varied backgrounds and experiences merged with new technology to create a brilliant viewer experience in The Hobbit: An Unexpected Journey. From the use of a historical sound bites to the showcase of the new Dolby Atmos experience, the film is a blending of vivid images and distinct audio perspectives. Well worth a viewing – or two – be prepared to immerse yourself in a completely different world, made possible through the work of visionary artists.