Last weekend I gave into the hype and checked out The Hunger Games, an American dystopian sci-fi action film directed by Gary Ross. It’s based on the novel of the same name by Suzanne Collins with an incredibly adaptive screenplay. Though I didn’t know much about the film or the book it is based on, I found the story captivating and the sound design intriguing.

You wouldn’t think there was as much effort in this film’s sound design as, say, Michael Bay’s Transformer films, but you would be mistaken. Though first glance at the sound crew reveals the production sound team was very small, (two sound mixers and two boom ops), but the Foley and ADR crews were a lot larger proportionally. The proportion is expected to be unbalanced in a heavy dialogued film and is mostly because the film focuses on one person’s story. Over all, exceptional work went into the Environmental Sound Effects, Foley (post production character sound effects) and Musical Score of The Hunger Games. 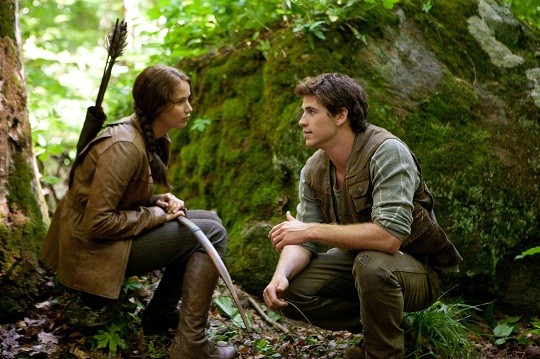 Katniss and Gale in District 12

Most of the film takes place in wilderness type environments, starting in the characters’ hometown and then spending a lot of time in the “arena” of the Hunger Games. Although the environments are similar, the emotional settings are quite different. The ambience of our main character Katniss’s hometown, known as District 12, has a typical calm and relaxed feel with the sounds of wind through trees and peaceful wildlife. The pleasant sounds are reminiscent of a peaceful camping weekend. To change the mood of similar settings during the film, ambient sound effect are added to create an eerie, even haunting feeling. Through the use of layering effects, the viewer feels tension, fear, and suspense even though the landscapes are the same.

Part of the movie takes place in what is referred to as the Capitol. Since this is a futuristic sci-fi film, the atmosphere is created with the use of citizen noise and other environmental created noises to give the viewer a sense of a familiar, yet futuristic world. 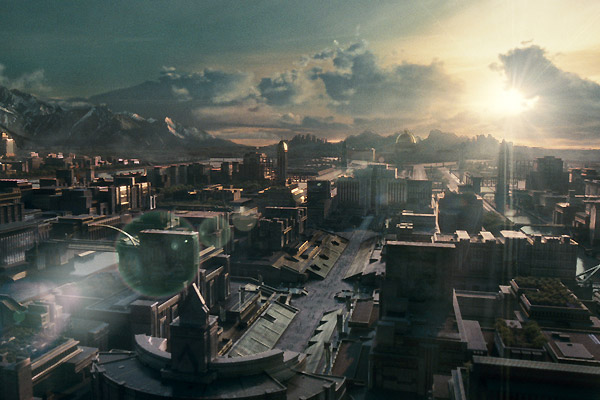 Aerial View of the capitol

Since this film spends a lot of the time following around one character, there was a lot of post work that went into the foley for the Hunger Game scenes. The sound department was obviously given plenty of time to record the necessary foley to keep the viewers capitvated with the film. For instance, most of the footsteps recorded were done with two microphones, one close mic’d on the foley artist and a boom from far away, allowing the mixing engineers to have more control of how things should sound based on what is visually represented. A lot of the foley was recorded in natural environments rather than a studio, which allows the ability to recreate the organic terrain better than would be possible in a sound lab.

One of the most interesting sound techniques in the film is the absence of sound. Two scenes come to mind specifically. The first is when Katniss is coming out on stage to be interviewed by Caesar Flickerman, one of the commentators for the Hunger Games. At this point in the film, she is bewildered, trying to figure out how to survive even though she is deathly afraid of whats to come. The way they portray her mental state is they muffled all the audio when she comes out on stage, and attenuate the volume. The effect is similar to what happens when a grenade explodes next to you in the video game Call of Duty. The viewer is instantly surrounded by the chaos she is experiencing and can relate to Katniss.

This technique is used similarly when the Hunger Games begin, where half of the tributes usually die in the first couple minutes of the game. What would usually be a gory image with sound effects reminiscent of Braveheart, it is instead replaced by an intense audio score and minimal grisly images. The effect creates an intense scene, but makes the disparity of children fighting against each other stand out. 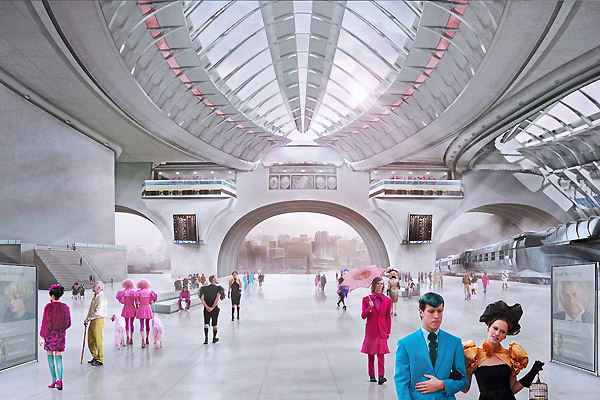 View of the enviroment in the capitol

The musical score for The Hunger Games was done by James Newton Howard, who is known for working on other films like The Dark Knight and King Kong. The score starts off with a light uplifting feel, which brings the viewer directly into the gorgeous landscape and community shots of District 12. It evolves into a more sinister mood once the “Reaping Day” scene starts and the preparation for the Hunger Games begins. The feel of the score turns darker, emphasizing the despair of the main character. The soundtrack includes songs by Taylor Swift, The Decemberists, Arcade Fire, Miranda Lambert, Kid Cudi, and Maroon 5.

One of the most memorable scenes musically for me was the arrival at the Capitol. Visually it is a glorious place, but the score has a very dark and eerie feel to it, spotlighting the fact that something sinister lurks below the surface. The score continues to fluctuate from dark to stimulating, to show how the characters struggle in the preparation for what is about to take place. During the Hunger Games, the score sticks with this tribal ambient feel, which sucks viewers into the suspense. In the end, the score helps close the film by giving the sense that although a victory has taken place, it is not as great of a victory as it may seem.